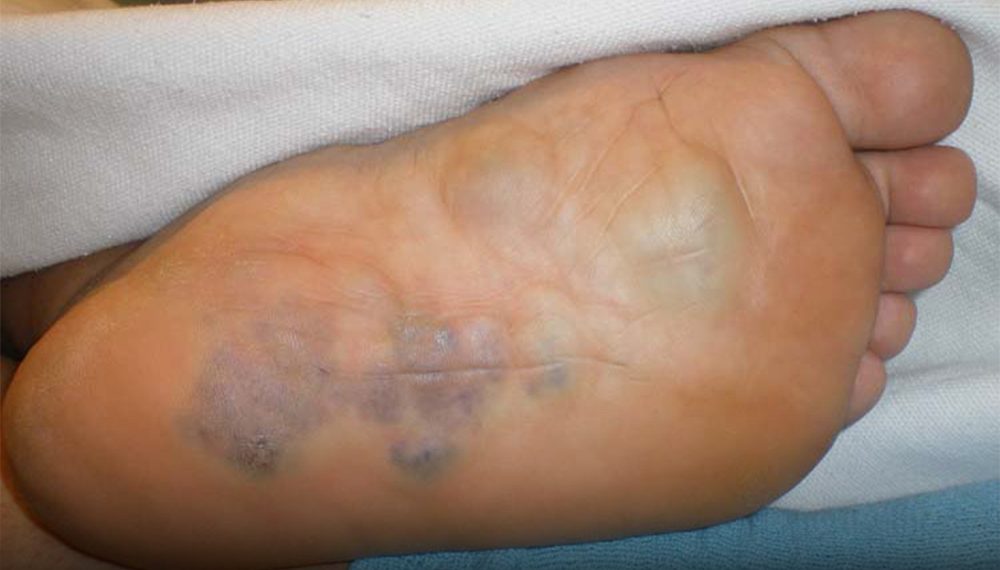 Abstract
Arteriovenous malformations (AVMs) of the lower limb typically occurs in the thigh, knees and very rarely on the foot, especially on the plantar aspect of the foot. Failure of recognition of this condition and prompt treatment results in complications such as pain, ulceration, bony abnormalities and limb length discrepancies in some cases.

Treatment modalities vary in accordance with the institutional convention as well as the surgeon’s preference. These may range from open resection, sclerotherapy, embolization, and radiosurgery when the lesion is relatively smaller in size.

Case Report
We report a case of a 20-year-old female of Asian descent who presented with a five-year history of pain, swelling and a venous ulcer over the medial malleolus of her left foot. Examination of her past medical records revealed the following: A duplex ultrasound was performed previously at another institution, which demonstrated moderate sapheno-femoral incompetence and incompetent perforators at the calf and ankle of the affected limb. She also had a past history of undergoing sapheno-femoral ligation followed by stripping of the greater saphenous vein.

Several months later, another ulcer developed on the medial aspect of the ipsilateral foot, just inferior to the medial malleolus. This ulcer was treated conservatively with compression bandage by the patient. However, there was no apparent clinical improvement and she presented to our institution five (5) years later.

A repeat duplex ultrasound showed reflux of the greater saphenous vein below the knee with incompetence of the calf perforators. A contrast enhanced Magnetic Resonance Angiogram (MRA) was performed, which demonstrated early contrast filling of the deep and superficial leg and femoral veins extending from a 5.6 cm by 4.4 cm cluster of serpiginous vessels in the plantar aspect of the left foot consistent with an arteriovenous malformation (AVM).

Figure 1 depicts the MRA of both lower limbs comparing the filling of contrast in the arterial phase of the scan. As clearly seen, there was filling in both the venous and arterial system of the left limb, compared to the arterial system alone of the right lower limb. This diagram also shows multiple anastomoses between the posterior tibial artery and the great saphenous vein. Based on the MRA findings, the diagnosis of an AVM was made and the ideal option to manage this condition was embolization. However, due to lack of resources, we were left with the only option of surgery.

Surgery was performed utilizing an incision on the plantar aspect of the foot, ligation of the feeding branches of the posterior tibial artery and removal of the malformation. Histology confirmed the presence of an arteriovenous malformation. Postoperatively patient was placed in compression bandage along with implementation of meticulous wound care of the ulcer on a daily basis. Complete resolution of the ulcer occurred one month after the surgery. Patient is currently pain free at three months after surgery and has started to notice marked reduction in the hyperpigmented areas of her foot.

A repeat MR angiography at three months after surgical resection, revealed complete resolution of the AVM.

Discussion
An arteriovenous malformation is an abnormal communication between an artery and a vein that bypasses a capillary bed. AVMs are most commonly congenital and arise from defects in vascular tissue during embryonic development. These lesions can theoretically manifest in any anatomical part of the body, approximately a third of them presenting in the lower limbs. [1]

Histologically AVMs are lined by non-proliferating endothelium of the vessels, which are not mitotically active [2]. As a result they grow in proportion with the body. Congenital AVMs are often high-flow lesions that manifest later during childhood or early adulthood. AVMs of the foot are rare, and can easily be missed if a thorough history and examination is not performed, as happened in the present case. Symptoms range from localized pain and swelling to venous ulcers and high-output cardiac failure, if not treated in a timely manner. The Schobinger staging system (Table 1) is used to classify AVMs based on severity symptoms and can be used as a guide towards management.

This report highlights a patient with Schobinger stage III AVM, since she possessed venous ulcers of the foot. Suggested imaging modalities include Duplex ultrasound, Magnetic resonance imaging and MR Angiography. Angiography remains the gold standard in assessing AVMs and aids in proper preoperative planning as well as an appropriate intervention [3, 4]. Transarterial catheter angiography is another investigative tool that is beneficial preoperatively, as it allows the surgeon to pin point the exact location of the AVM, including its arterial supply and venous drainage [5-8].

Because AVMs of the extremities are uncommon, it is not surprising that the literature has not yet documented a specific treatment as being the gold standard for management of these lesions. Depending on the availability of resources and institutional conventions, patients can be offered surgical resection, sclerotherapy, embolization or radiosurgery with the latter being reserved for small lesions [9-11]. However, the surgeon must carefully consider the location, extent of the lesion, as well as specific treatment risks while treating these lesions. Most authors  recommend offering active treatment for stages II, III, and IV lesions [12, 13]. The goals of the treatment are to control symptoms, preserve function, and improve anatomical deformities [14, 15].

Also, the most favourable outcomes reported in the literature include the combination of embolization and surgical resection [4, 12]. Embolic agents commonly recommended include ethanol, polyvinyl alcohol, fibered coils and tissue adhesives. Of these, ethanol has been documented by many studies to be the only agent having long-term salutary results [16-18]. Embolic agents, when used in isolation, may require more than one treatment-sitting in order to completely eradicate the AVM [19]. Even with initial complete eradication of the nidus, AVM’s may recur within 5 years in an estimated 81–87% of patients. [13, 14, 15, 19].

Short and long-term follow-up of patients are absolutely necessary and involves repeat duplex ultrasound and MR angiography when indicated. Main determinants of outcome include location of lesion, size of lesion, Schobinger staging and the procedure utilized for managing the AVMs.

Conclusion
Arteriovenous malformations are especially uncommon in the feet. It should be considered a differential diagnosis in patients presenting with signs of venous disease. A missed diagnosis can result in significant complications and failure of treatment. Preoperative investigations should include a duplex ultrasound and peripheral or MR angiography. Due to its high recurrence rate, many different modalities of treatment have been recommended, although the most successful management is the combination of embolization and surgical resection. Follow-up is mandatory and may involve repeat duplex scans and MR angiography when indicated.

Figure 2: Venous ulcers on medial aspect of Leg and foot before definite treatment Figure 3: MR Angiogram demonstrating AVM on the inferior medial aspect of the foot