Antibiotic Resistance in Trinidad: A population-based survey of adults.

Results: The response rate was 91% (502/550). Most responders (53%) reported having taken antibiotics during the 6-month period prior to the survey. Almost 60% of responders believed that sore throat and colds/flu can be treated with antibiotics. Sixty-seven percent of responders believed that they had no individual role in combating the issue. Responders with a primary level education or older respondents were more likely than responders with a higher level of education or younger to agree that antibiotic resistance only affects those who use antibiotics frequently (p= 0.002 and p=0.017 respectively). Income level was also significantly associated with knowledge levels, the higher the income the more knowledgeable the responder.

Conclusion: Our study found that public knowledge of antibiotic resistance is low. Age, income and educational levels were significantly associated with certain knowledge parameters. Much work needs to be done to change the attitudes of responders who believe they have no role to play in the fight against this national and global threat. These findings may be useful to health education professionals and government antimicrobial resistance programmes.

Bacterial strains that are resistant to antibiotics are rapidly emerging and pose a major health risk, for example, the emergence of drug resistance in Neisseria gonorrhoeae, which is a common sexually transmitted infection globally.4 The World Health Organization (WHO) classifies antibiotic resistance as “a major threat to the world’s health, development and security of food,” and hence advocates for an urgent change to the current use and style of prescribing antibiotics.5 Additionally, antibiotic-resistant infections place a strain on health care systems as they can lead to extended treatment periods and a rise in the global mortality rate.6,7

In 2015, the WHO conducted a global study involving 12 countries from the six WHO regions.8 In that WHO study, Barbados and Mexico represented the Region of the Americas. This current study sought to undertake the study in Trinidad and Tobago (TT) as TT was not included in the global survey. The authors believed that the information derived would be useful for the Ministry of Health’s Antimicrobial resistance (AMR) prevention and control efforts.

This study therefore aimed to determine the knowledge and awareness of antibiotic resistance among the Trinidadian public and to ascertain if there are factors associated with levels of awareness and knowledge.

Study Design: A cross-sectional study was undertaken using convenience sampling. The methodology for the study was based on that of the 2015 WHO ABR survey with minor modification to the design and data collection tool in order to allow for an adequate comparison.8

Sample Size: A sample size of 550 participants was determined by the authors based on the methodology of the WHO study wherein 500 participants were included from countries that conducted face to face surveys; whereas in countries undertaking online surveys, the sample size was 1000 participants. In their study, the WHO stated that the sample size was recommended as the study aimed to ascertain views from the general public and not specific groups in society. They further clarified that a sample of 500 was thought to allow for a robust study which at the same time allowing for effective resource management and that a similar study on antimicrobial resistance conducted by the European Commission in 2009, used as a similar sample size.8,9

Data Collection: Data collection took place at public spaces throughout Trinidad mainly shopping areas where persons from all socio-economic strata may be sampled. Data were collected for a one week period (which included all days of the week) in January 2018.

At the various locations, using convenience sampling, the researchers approached potential participants, introduced themselves, explained the nature of the study and asked the potential participants their willingness to participate. Participants (18 years or older) who agreed, completed and signed a consent form. Participants who were 16 and 17 years old  were selected only if i.) a parent of legal guardian was present at the time of survey and ii.) both the participant and guardian consented to taking part in the survey.

The data collection tool in the WHO report was designed for adaptation on a country by country basis. The questionnaire used in the study was a modified version of this tool adapted to the local context, for example using local counties, income ranges that are more representative of local figures or removal of terms like “hawker” which are not commonly used in Trinidad.

This modified tool was piloted over a two week period in December 2017 among a group of second year university students (n=20). They were interviewed by the authors to ensure the questions being asked were clear and unambiguous. After completing this exercise, the authors were satisfied that no further modifications were needed.

The questionnaire consisted of 8 questions related to demography and 14 questions on ABR. Questions included frequency of antibiotic use, conditions that antibiotics should be used in and opinions on antibiotic use and antibiotic resistance.

Data were obtained using face-to-face surveys conducted by the researchers.

Ethical approval: This study was approved by the Campus Ethics Committee of the University of the West Indies, St. Augustine Campus on the 8th of December 2017. Reference number: CEC378/11/17.

When responders were asked when they last used antibiotics, 53% (n=266) reported using antibiotics within the past six months, with 20% (n=100) of persons reporting usage within the last month.

Table 2: Percentage of ‘Yes’ responses from all responders to “Can these conditions be treated with antibiotics?”

Figure 1: Percentage of ‘true’ responses from all responders to statements designed to determine knowledge of antibiotic resistance. 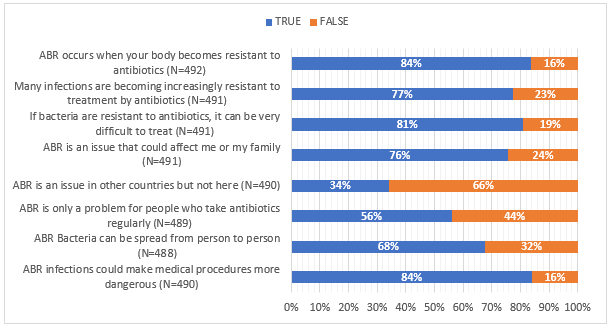 Figure 2: Age based responses to whether antibiotic resistance is only a problem for people who regularly take antibiotics.

Figure 3 shows statements about ABR and the agreement of responders to each. The majority of responders (56%, n=265) agreed that Antibiotic resistance was a major global threat.

Additionally, 88% (n=417) of responders stated it was everyone’s responsibility to tackle the issue but 67% (n=318) felt they could not do anything about it and 67% (n=318) were worried for themselves and their families. Furthermore 57% (n=271) of responders thought that they would be fine if they took their medications as prescribed.

Figure 3: Percentages of all responders who agreed to statements surrounding attitudes towards antibiotic resistance. 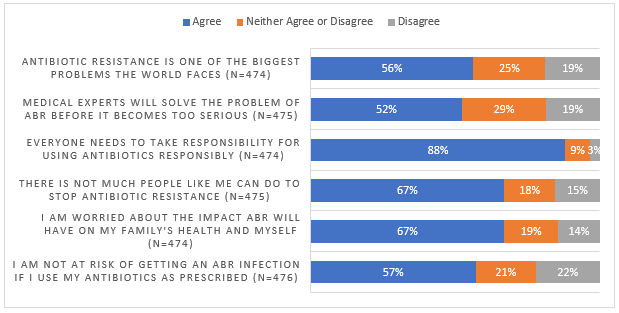 Table 3: Percentage of responses from all responders to “There is not much people like me can do to stop antibiotic resistance” by household income (p = 0.027)

Education vs the statement “I am not at risk of getting an antibiotic-resistant infection, as long as I take my antibiotics as directed”

The data outlined in Table 4 shows that the higher the responder’s education levels are, the chances of them agreeing with the statement decreases. Sixty-seven percent (n=12) of persons with no education agreed with the statement versus 51% (n= 93) of those with higher education (p = 0.023).

Table 4: Percentage of responses from all responders to “I am not at risk of getting an antibiotic-resistant infection, as long as I take my antibiotics correctly” by level of education. (p = 0.023)

Actions that can be taken to address Antibiotic resistance

This study presents useful findings that may be used by the Ministry of Health in their national efforts against antibiotic resistance.

The misuse of antibiotics for viral infections has been well studied with physicians, pharmacists and patients contributing to this phenomenon.10-14 Lee et al. found that those in lower socio-economic groups and those with diabetes had higher expectations of being prescribed antibiotics, while men and those with lower educational attainment but higher psychological distress and feelings of control over their health displayed a greater attitude of antibiotic entitlement.10 The majority of responders (61%, n=303) in our study stated that antibiotics may be used for colds/flu which was in keeping with the data from Mexico (61%) and the global average (64%), while less than half (47%) of Barbadian responders agreed.8

In order for the public to take appropriate action in combating antibiotic resistance, they should possess a certain level of awareness. Our study showed that just over half (53%, n=266) of responders knew of the term “antibiotic resistance” compared to 43% of Barbadian responders, 89% in Mexico with a global average of 70%.8

Rapidly emerging antibiotic resistant infections pose a danger to health, development, food security and the healthcare system.4-7 The majority of study responders (56%, n=256) agreed that antibiotic resistance was a major global threat, and this was comparable to Mexico where 55% of responders agreed with the statement; the global average was 63%.8 In contrast, in Barbados, less than 3 in 10 responders (27%) stated that antibiotic resistance was a major global threat.8 There is therefore a clear need for raising knowledge and awareness about the seriousness of this issue in Latin America and the Caribbean.

Despite 20% (n=102) of responders reporting antibiotic usage in the past month and 53% reporting usage in the previous six months, more than half of responders stated that antibiotic resistance was a problem solely for persons who regularly utilise antibiotics. Fifty-seven percent (n=271) of responders believed that they were not at risk of acquiring an antibiotic resistant infection if medicines were taken as prescribed. The majority did not believe there was anything they could do to address the issue. In addition, most (52%, n = 247) responders were of the view that medical experts will solve the problem before it becomes too serious. These findings indicate that responders lack insight into the issue. They do not see a role for themselves in the battle against antibiotic resistance. In comparison, 59% of Mexican responders and globally, 64% agreed that medical experts will solve the problem.8 However, 56% of Barbadian responders neither agreed nor disagreed with the statement.8

Certain knowledge parameters were found to be significantly associated with age, income and education levels in our study. Similar findings were reported in other studies. Alqarni et al. found higher mean knowledge scores among responders working in the health sector, higher educational groups and high monthly income groups.15 A study by Andre et al. also found a positive association between education level and knowledge about the effectiveness of antibiotics.16 A Trinidad study in 1992 found that tertiary level education was significantly associated with knowledge about safety and usage of antibiotics while possessing private health insurance was associated with knowledge of safety and side effects.17

Limitations of the study

The study sampling method was convenience sampling. This sampling method may have introduced selection bias.  However, the shopping areas sampled allowed for a cross-section of the population of Trinidad which was seen in the demographic data of responders. Self-reporting can also lead to incorrect information particularly concerning education and income levels. The study findings do not support information bias since the findings on education and income levels were mirrored in other studies.8,11,15,17,18

The information obtained from this study may be used to direct the efforts of health education professionals.  Further research in the form of focus groups may be conducted with subgroups including prescribers to understand expectations and behaviours surrounding antibiotic use. The One Health approach is key to tackling antibiotic resistance across sectors and the Government of Trinidad and Tobago, in collaboration with partners, has implemented the One Health approach which is a positive step.5,21 This study findings can assist the programme managers who are responsible for implementing the national Antimicrobial Resistance Action Plan, in particular, at the community level.