Abstract
A Bezold abscess is a rare complication of acute otitis media and mastoiditis which is characterized by the collection of pus in the sub-muscular spaces from the mastoid cavity. A 27-year-old female with history of Juvenile Rheumatoid Arthritis presented with right ear discharge and post auricular swelling extending along the sternocleidomastoid muscle. A Bezold abscess was diagnosed upon review of the patient’s CT scan. She subsequently underwent incision and drainage of the abscess in addition to a cortical mastoidectomy. Although the development of intra and extra axial complications of acute otitis media are very rare in the post antibiotic and vaccination era, it should be noted that a compromised immune system is a significant risk factor for this complication.

Introduction
The complications of Acute Otitis Media [AOM], Chronic Suppurative Otitis Media [CSOM] and Acute Mastoiditis [AM] can be severe. These conditions are associated with significant morbidity and mortality as they can lead to both extratemporal as well as intratemporal spread of the infection. The latter is further sub- divided into intra and extracranial disease [1]. Friedrich von Bezold in 1881, first described Bezold abscess as a rare complication of otitis media [2]. It occurs after the development of a mastoiditis with pus leaking along the incisura digastrica, between the fascial planes of the posterior belly of the digastric muscle and sternocleidomastoid muscle [3]. Furthermore, the relative thinness of the medial wall of the mastoid bone allows this to transpire. Authors have described only 35 cases of Bezold abscesses in the published English literature since 1967 with the majority of these cases in adults [2,4]. We present a case of Bezold Abscess that was seen at our institution.

Case Report
The patient is a 27-year-old female with a history of asthma and Juvenile Rheumatoid Arthritis (JRA) who initially presented to the Accident and Emergency Department (AED) with a history of right ear discharge for three days. She was referred to the ENT clinic for care but did not attend due to poor social support. Three weeks later the patient re-visited the AED with persistent ear discharge in addition to a new neck swelling for one week. The swelling was progressively increasing and associated with neck stiffness as well as fever. She gave no previous history of ear infections and denied use of oral steroids or immune modulators for her JRA.

On examination the patient had copious yellow discharge from the right ear. The right neck swelling was found to be extending along the right sternocleidomastoid muscle measuring 6 cm x 3 cm in size. It was tender, hyperaemic and warm. The patient also had torticollis. Nasal findings were of a saddle nose deformity as well as digital deformities of both hands from longstanding JRA. The CT showed a 4.4 cm x 2.9 cm collection with a thick enhancing wall in the right mastoid region extending into the sternocleidomastoid and scalene muscles.

Complete opacification was noted in the right mastoid air cells and middle ear cavity indicative of chronic otitis media as well as mastoiditis. There was also evidence of ossicular chain erosion. Cefuroxime was commenced, subsequently the patient was taken to operating theatre where an incision and drainage of the neck abscess was performed. The mastoid bone was osteomyelitic and a cortical mastoidectomy was performed with all diseased bone removed.

A polyp found on examination of the external auditory canal was removed, and the ear was packed with antibiotic gauze. Her post-operative management consisted of intravenous antibiotics, analgesia with “toileting” of the ear. Wound cultures from the ear and neck abscess grew, Acinetobacter species, Staphylococcus aureus which were sensitive to Ciprofloxacin and the patient was commenced on same. The patient was discharged on the fifth post-operative day with a follow up appointment in our ENT clinic.

Discussion
A Bezold abscess is an extratemporal collection that occurs as a complication of CSOM and AOM with otomastoiditis [5]. Additionally, the process of acute infection of the middle ear spreads contiguously to the mastoid air cells and without adequate treatment, infection in the mastoid can rupture through the digastric incisura [6]. Research has shown that pus tracks inferiorly through the neck deep to the sternocleidomastoid and digastric muscles or between the layers of the deep cervical fascia [7]. Infection along these planes, can reach as posteriorly to the vertebrae which can result in spinal cord compression and death. Inferior extension can involve the chest wall or the mediastinum, where mediastinitis can occur with associated high mortality [1,7] .

The readily available use of antibiotics has decreased the incidence of Bezold abscess from 20% of cases to a rare occurrence in the post antibiotic era [7]. In the 1950’s approximately 0.4% of patients with acute otitis media developed an acute mastoiditis. Comparatively in the 1980’s this fell to less than 0.004% [1]. Additionally, the introduction of the pentavalent pneumococcal vaccine is also thought to be a factor in the decrease of acute otitis media as well as downstream complications such as Bezold abscess [8]. However, the current literature shows a resurgence of Bezold abscesses which may be related to a rise in the number of immunocompromised or immunosuppressed groups of patients. This group includes those living with HIV/AIDS, cancer on chemotherapy and organ transplant recipients [9]. Additional risk factors for the development of AOM and CSOM in the paediatric population include poor socioeconomic conditions, craniofacial abnormalities and ciliary dysfunction [2].

The case presented describes a patient with immunosuppression due to JRA. This underlying disorder is a major contributor to her developing such a significant complication from both a medical and socioeconomic perspective. Rheumatoid arthritis is a chronic inflammatory syndrome. It primarily affects synovial joints but also includes many systemic manifestations such as rheumatoid nodules, pulmonary disease, vasculitis and increased comorbidities [10]. The extra musculoskeletal features of RA can affect many organ systems but we were unable to find any literature on association of nasal deformity and rheumatoid arthritis as was seen in this patient. Research has also shown that the age adjusted mortality of patient with RA is approximately 2-fold that of age matched cohorts, and the leading cause of death is from infectious diseases [11].

Dysfunction of both the innate and adaptive arms of the immune system contribute to the increased infection risk. Neutrophil dysfunction from the presence of anti-neutrophil antibodies and resultant neutropenia hampers the body’s first line ability to recognise and protect against invading organisms. Furthermore, t-cell function is impaired in RA, decreasing ability to recognise previously unknown antigens [12]. The effects of this diminished immune competency are also manifested in the polymicrobial and atypical organisms responsible for the infection in this presented patient. Staphylococcus pyogenes, Acinetobacter species, staphylococcus aureus, were isolated from the patient ear and neck culture swabs. The most common organisms isolated form Bezold abscess are Staphylococcus pneumonia, Haemophilus Influenza, Staphylococcus aureus and Pseudomonas aeruginosa [9].

The role of imaging in temporal bone pathology is important especially in complicated cases. These image findings may significantly impact on the choice of treatment. Helical scanning in Computed Tomography Scans for the production of high resolution images has made CT scans the modality of choice for temporal bone infections [13]. In deep neck space infections secondary to mastoiditis, such as Bezold abscess, the sturdy attachment of the sternocleidomastoid, trapezius, splenius capitis and longissimus capitis muscles to the mastoid process can make clinical detection of a submuscular collection difficult [14]. Thus, having a high index of suspicion and low threshold for CT scan is necessary.

CT imaging in these cases reveals a unilateral opacification of the middle ear and mastoid cavities, often with underlying bone erosion of the mastoid tip. The abscess collections involves the adjacent musculature of the mastoid as earlier described and extends inferiorly along the fascia [15]. Surgical intervention is the management of a Bezold abscess which includes excision of the mastoid pathology, removal of granulation tissue and abscess drainage[2]. Appropriate antibiotics should also be empirically commenced, followed by sensitivity guided therapy following culture reports.

Conclusion
The diagnosis of Bezold abscess is still a relatively rare finding as a complication of acute otitis media and mastoiditis. However, as populations of persons of immune compromised status continue to increase, it is necessary as clinicians and surgeons to have a high awareness for such complications to arise. 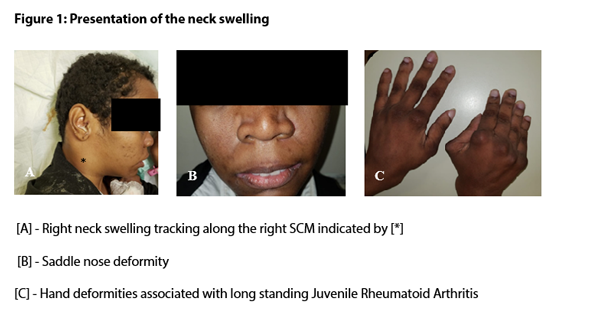 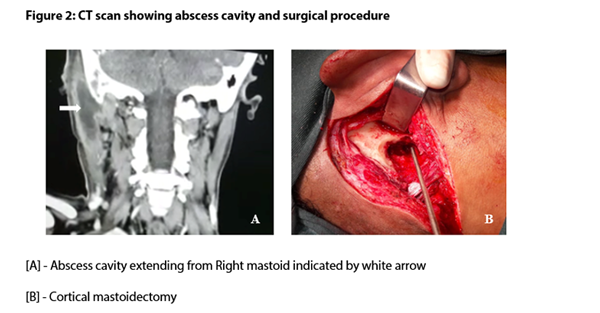